In Juliet’s Garden was the first project of our Community Engagement Program. For this project, we partnered with the San Gabriel Mission High School (SGMHS) to produce their first theater show in many years. The school’s Principal, Jamie Collins, is passionate about education and about the Arts in Education. Of the project, he was effusive in his praise saying ” I really appreciate the way you truly empowered our young women. Hopefully we can continue the collaboration.” 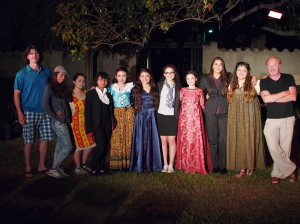 The play was produced and directed by Jonathan Salisbury, Program Coordinator at the Playhouse. Being that (SGMHS) is an all girls school, Jonathan was determined to find a play that would allow the girls to play their own gender in a piece that put women in a positive light: also that would give the students an opportunity to explore experiences and worlds beyond their own.

In Juliet’s Garden, written by Judy Elliott McDonald, brings together female characters from some of Shakespeare’s most famous plays as they debate his representation of women in these and other works. Shakespeare sends his (fictional) agent to address these concerns to Juliet’s garden where the various characters are assembled. The play is a one-act comedy that manages to address some serious questions.

Following auditions in July 2014, the girls rehearsed generally three times a week from August through to the October performance dates. As well as rehearsals at the school, the group also had the chance to work onstage at the Mission Playhouse and at the performance location – The Grapevine Arbor , chosen for it’s beauty and appropriateness for the project as well as it’s proximity to both the school and to the Playhouse. For some of the girls, this had been their first audition, and their first ever experience of public performance. 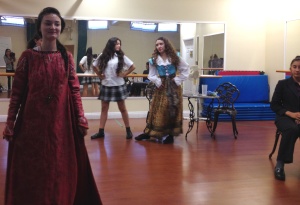 Rehearsals at the Mission High School

The students in performance at the Grapevine Arbor

The show was performed for two nights to parents, friends and members of the public.

“It was a real pleasure to work with these girls”, says Salisbury. “They brought such intelligence, creativity and humor to their roles. I was delighted to watch each of them grow in confidence and stature, truly inhabit their talent, their selves and their characters.”

With assistance from: Laura Ceballos and Rocio Martinez at the Mission High School, Josh Fairman, John Holder and Richard Godinez  at the Mission Playhouse, Tom Boecking, James Lara and other staff at the City of San Gabriel’s Community Services Department.

For more information about this project, or other Mission Playhouse Community Engagement Projects, please contact Jonathan Salisbury, Program Coordinator at jsalisbury@missionplayhouse.org or (626) 308-2865 xt 221.