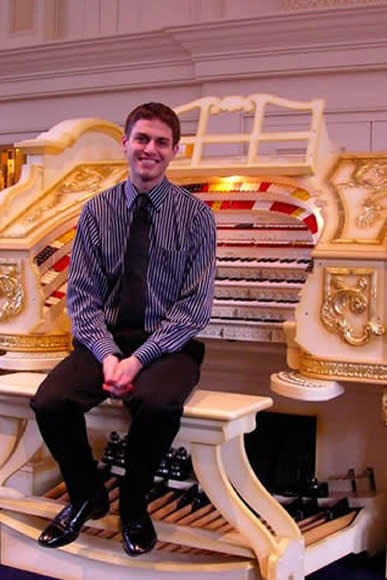 Born in 1987, Mark Herman has been studying the piano since he was seven years old and began classical organ lessons at the age of twelve. His first introduction to the theatre organ was when he was in fourth grade and was at the Embassy Theatre in downtown Fort Wayne. This was made possible by the late Robert Goldstine and the local American Guild of Organists chapter’s Room on the Organ Bench program. In 2001, he began theatre organ studies with John Ferguson of Indianapolis, who is recognized worldwide for his skills as a teacher.

In 2003, Mark played a cameo performance at the American Theatre Organ Society’s (ATOS) annual convention in Oakland, California. In 2004, he won the ATOS Young Theatre Organist Competition in Milwaukee at the Riverside Theatre. That enabled him to perform a critically acclaimed concert for the ATOS 50th Anniversary Convention in Pasadena in the following July. During 2006, he toured for 6 weeks in Australia and New Zealand, setting records in CD sales at many of the venues in which he appeared. In 2009, he returned for a second 7-week tour of those countries.

He has played dozens of solo concerts in theatres and venues from coast to coast. In addition to playing the organ, Mark has also been known to perform on the piano, as well as introduce several original compositions.