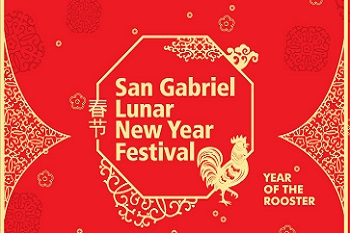 From morning to night, great music and dance, cultural entertainment, food and family fun, all come together in a colorful celebration of the modern and traditional at the 3rd Annual San Gabriel Lunar New Festival Saturday, January 28th at 11:00am!

Join us onstage at the Playhouse to participate in 2 free family-friendly activities during the festival: 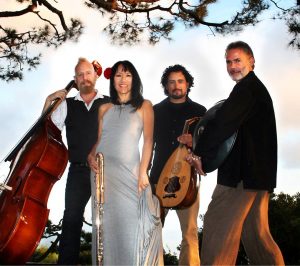 2:30pm – 3:15pm Suzanne Teng and Mystic Journey (World Music)
Suzanne Teng & Mystic Journey are an award-winning world music ensemble that transcends geographic and musical boundaries creating a new type of world music that is ethereal, exotic and upbeat. Suzanne plays an array of wind instruments from around the world including flutes of several kinds. Gilbert Levy plays African and Middle Eastern drums as well as the Turkish saz and the magical Swiss Hang drum. Dann Torres plays Arabic oud (lute) and guitar, and Jon Ossman plays the upright acoustic bass and the ethereal Indian dilruba (fiddle).
Their entertaining performances appeal to people of all ages and are a musical journey around the world that is educational, peaceful, and lots of fun. Audience participation is encouraged on simple yet powerful chants from Nigeria and the Cherokee tradition, and dancing is always appreciated! 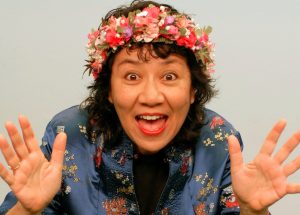 4:30pm – 5:00pm Barbara Wong (Storyteller)
Barbara Wong began telling stories professionally as an Artist-in-the-Schools for the Hawaii State Department of Education, visiting elementary & middle schools throughout the state. She now shares stories with audiences of all ages in schools, libraries, zoos, museums, and at festivals and other special events. In Hawaii, Barbara worked as a storyteller/drama specialist with the Alliance for Drama Education. She also visited public libraries and senior centers throughout the Islands as part of a University of Hawaii cultural outreach program, and she was a resident storyteller for the Honolulu Zoo. Her other credits include performances for the Biennial Conference on Literature and Hawaii’s Children, Sea Life Park, First Night Honolulu, and the Talk Story Festival. She was the first to produce storytelling programs for adult audiences at the Honolulu Academy of Arts museum theatre, including “Tellabration”; “Hungry Ghosts” (her theatre program of Chinese ghost stories and supernatural tales); and “Firecracker Dragon: Stories to Celebrate Chinese New Year.” She also inaugurated a story walking tour, and a culinary tour of Honolulu’s Chinatown for Kapiolani Community College.

She is also a storyteller with the LARP Literacy Council through its grant-funded programs, promoting reading literacy by bringing her storytelling programs to pre-schools, and conducting Read Aloud Workshops which teach parents how to read with their young children.

She has been a guest storyteller on the Emmy award-winning children’s program Jakers! The Adventures of Piggley Winks currently airing on PBS. Her newest work is a family program of bilingual stories called Cuentos del Mundo – Stories of the World told in Spanish and English. Barbara is currently working on producing a CD of Asian ghost stories and supernatural tales called Asian Spooks.