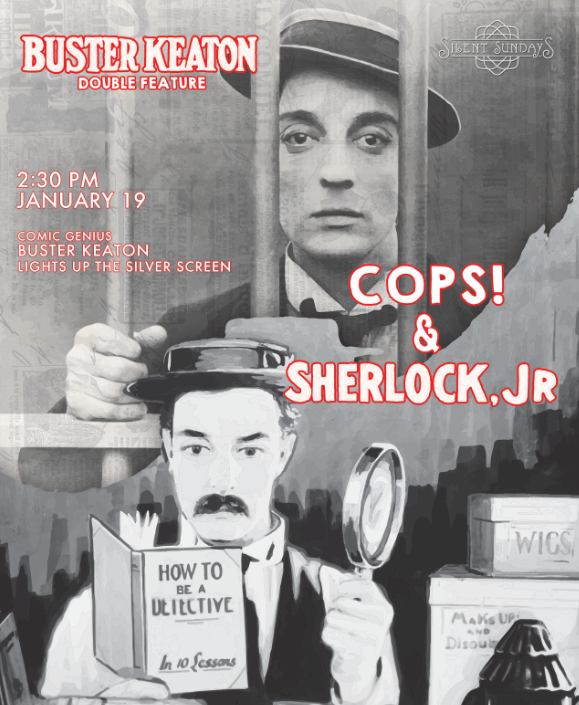 If you did not get the chance to see Show People at the Playhouse this Fall, we have a few more fantastic films coming up!

On Sunday afternoon, January 19th at 2:30pm, we’ll be screening two films that Buster Keaton not only starred in but directed: the 1922 two-reel short Cops followed by 1924’s Sherlock, Jr.

“If you are looking for the perfect introduction to the joys of silent film’s unique visual storytelling, whether for yourself or friends, Cops is a delightful jumping-off point” (loc.gov). In Cops, Keaton, in the hopes of impressing his love, inadvertently makes a series of unfortunate decisions which leads to him being chased by hundreds of cops in the streets of Los Angeles.

In Sherlock, Jr. Keaton plays a projectionist and janitor at a movie house with dreams of becoming a detective. The film is “clever, charming, inventive, and full of surprises” (commonsensemedia.org). “A non stop collection of gags and stunts….it is one of Keaton’s best loved films, equally embraced by long time aficionados as well as newcomers to silent comedy” (tcm.com).

Accompanying the films on our 1924 Mighty Wurlitzer theater pipe organ is organist Bill Campbell.  He has performed across the country and throughout the United Kingdom and is currently the organist for the Paramount Iceland Skating Rink located in Paramount, California.

Silent Sundays continue with The Freshman (1925) starring Harold Lloyd on March 22nd, and Charlie Chaplin’s The Gold Rush (1925) on May 31st.

*** Online/phone orders except group tickets are subject to additional fees.***

There are 3 ways to purchase tickets: online, over the phone, or in person.

To purchase tickets online (up to 9), click the button above.