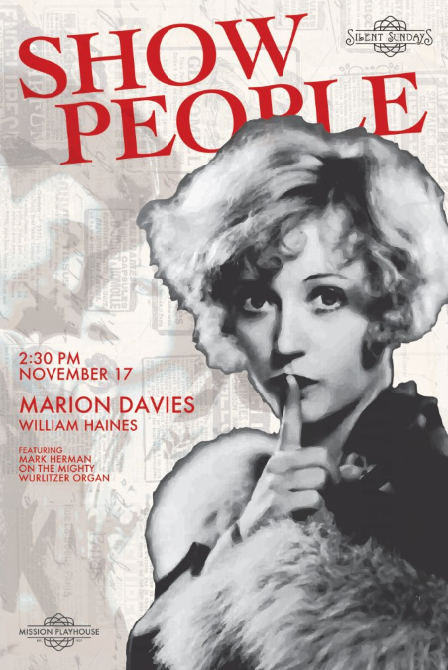 Silent Sundays with live Wurlitzer organ accompaniment are back this Fall featuring returning silent favorites Charlie Chaplin, Buster Keaton, and Harold Lloyd, along with a new face to the Playhouse screen, Marion Davies!

Purchase your subscription and see the series for the special price of $35! (more info below on how to purchase a subscription). Each subscription comes with an 11” x 17” version of our Silent Sundays series poster which will be available for pick up on November 17th. Click here to read more about the series.

Davies’ comedic talent shines in Show People. The film “boasts fast-paced humor, a lively leading man in the form of William Haines, a gentle ribbing of Hollywood, and more star cameos than you can shake a stick at” (moviessilently.com). New York Times film critic Mordaunt Hall wrote “So clever is the comedy in Show People…that it would not be at all surprising to hear that many in the audiences had sat through it twice.”