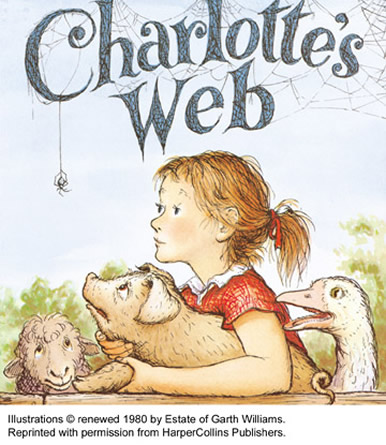 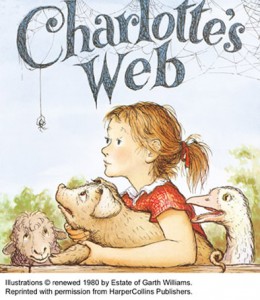 Based on E.B. White’s classic book which has been read by generations of children since it first appeared in 1952 and remains a favorite today.

The story opens on a farm with the birth of a litter of pigs. The farmer, Mr. Arable, is about to destroy the tiniest one, but is stopped by the pleading of his young daughter, Fern. She takes over the bottle-feeding and special care required for such a little pig -whom she names “Wilbur” – and the pig flourishes. Now that Wilbur is growing, Mr. Arable must sell him – but, again at Fern’s urging, the pig is sold to her Uncle Homer Zuckerman. Since the Zuckerman’s farm is just down the road, Fern can still visit him often.

On the Zuckerman’s farm, Wilbur meets many new animals but without Fern around as much, he admits to feeling lonely. One night, a voice answers his wishes, and promises to be his friend. The next morning, he finds out that the voice belongs to a beautiful grey spider named Charlotte. Although Wilbur is nervous about trusting this new acquaintance, he soon learns that Charlotte is his loyal and true friend when she devises a plan to save him from his inevitable trip to the slaughterhouse. Through her talent at weaving words into her web, and her sacrificing of most of her energy to do so, she convinces “the people” that Wilbur is “some pig,” and he is insured a long life in the barnyard.